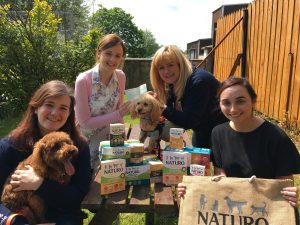 We are very pleased to announce our support for Northern Ireland Charity, Doggy 911, which is focused on rescuing dogs in danger from China.

Established in 2017, Doggy 911 has already rescued and rehomed 11 dogs from China, many of which were being used for testing or were at risk of abuse or death.  Mackle Pet Foods, which has recently won a number of awards for its Naturo product, will support the charity in the next two years through a £1000 donation, and will provide Naturo food and support to rehomed pets from China, and to events organised by Doggy 911 in the region.

In addition, the business will organise an annual staff fundraiser for Doggy 911, to raise much needed funds to rehome dogs at risk in China.  It takes over £700 to rescue and rehome a dog at risk from China and bring it back to Northern Ireland.  All dogs rescued are then placed into adopted care with families locally.

“We are delighted to be announcing this two-year partnership to help Doggy 911 further the amazing works that they undertake.  We have already met a number of the rescued dogs from China, and the stories of the works undertaken by the Doggy 911 volunteers are amazing, as are the dogs, a number of which have already visited us at our factory in Moy.   As a family pet brand, we are really delighted to help Doggy 911 to rescue more dogs, and to raise awareness of their important works, and we are excited about the opportunity to work with Gabby and her team on this great cause.”

“We thank Mackle Pet Foods not only for their generosity but their support. It’s through the support of local businesses and the community that we are able to rescue more dogs and get them into safe and loving homes.  It takes over £700 to rescue a dog, so the charity is always open to donations and offers of support.”

If you would like to make a donation to the team or rehome one of the Doggy 911 dogs visit: Facebook @doggy911rescue, Instagram @doggy911rescue_ or email c2irescue@hotmail.com.