We had a chat with each of our second round finalists to hear all about their favourite furry friend, covering everything from coming home stories to adorable antics and of course Cat Club! 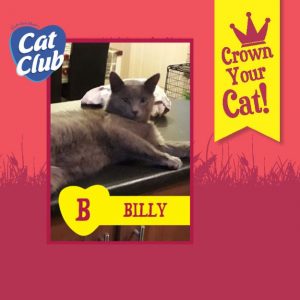 Billy found his new home when Irene found his carpark (Think the cat version of Cinderella).

A kitten to a stray cat living at a nursing home, running around the carpark was Billy’s daily exercise but he never could find his car to take him to a new home… until he met Irene.  Alerted to this little kitten’s situation by a cousin working at the nursing home, Irene jumped in her car and opened the door to this little one, taking him to a warm house and a bowl of Cat Club.

Billy was only 5 weeks old but he soon found he wasn’t the only tiny member of the family… Irene’s daughter was 1 years old at the time and instantly fell in love with her new brother!  Following a trail of paw prints often lead to finding hands prints as these two became inseparable from the beginning (we’re struggling to handle the cuteness right now).

Billy’s day always starts off on the right paw with a bowl of Cat Club! However after he’s taken care of his morning munch, he’s back to taking care of his favourite girl.  You won’t find one without the other because this little cat isn’t aware he’s not a human child too! From playing with her toys (Lego blocks are a firm favourite, Bob the builder better watch out) to sleeping in her bed, this friendly feline loves to eat, sleep, play, repeat (in that order).

Choosing to spend his days with his favourite friend hasn’t gone unnoticed by Irene’s daughter, when she gets a treat he has to get one too (at Cat Club HQ we’re wishing we were friends with Irene’s daughter too!).

Why should Billy be our Cat Club winner?

I don’t know what would become of us if anything happened to him, Billy is one in a million.  He is our daughter’s best friend and we love him to bits, we believe he should win because he has what it takes to be a King.

Think your feline friend has what it takes? To find out all about our competition and how you can enter, click here.